Somewhat squarely in the middle of New York felony offenses involving theft and fraud, Third Degree Grand Larceny, New York Penal Law 155.35, is by all accounts quite serious and a crime routinely accompanied by consequences that reach far beyond the four corners of a courtroom or accusatory instrument. Whether a defense attorney is representing a client for allegations involving skimming cash, altering invoices, embezzling from an employer, stealing a painting hanging in a restaurant or using another person’s personal information to charge monies on a victim’s credit card, if the amount of the theft is significant enough, a criminal record, jail, and the loss of professional licensesure may all be on the table. Make no mistake, if there is such a thing as best defense your White Collar defense lawyer can implement, its one that is both strategic and commences as early in the process as possible to limit your exposure or secure the exoneration you deserve. 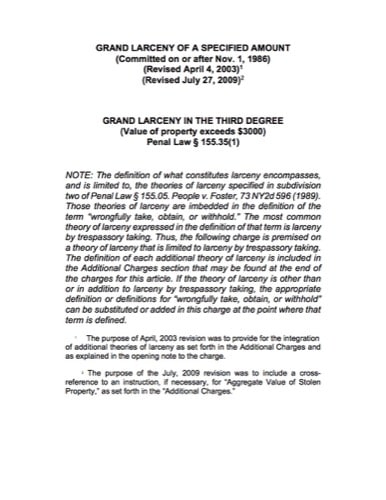 It would be easy to describe Penal Law 155.35 simply as stealing property valued more than $3,000.00 but not exceeding $50,000.00. However, because nothing is straightforward in the law, stealing is really more than a mere wrongful taking. Questions judges may ask when reviewing Grand Jury minutes and determining if you violated one of the four New York Grand Larceny crimes codified in Article 155 and examined on Crotty Saland PC’s resource page, is whether you deprived the owner of the property or a significant piece of its value, exercised control over the property, or simply stole in the commonly accepted meaning of the word. While it would be easy to conclude that a District Attorney proved each element of this crime where the evidence established $15,000.00 was illegally transferred from the account of a person who did not know the accused or $6,500.00 worth of clothes were shoplifted from a store, it may be less clear when the particular object or item taken had a disputable value or both the accused and complainant shared in its ownership.

A class “D” felony, Third Degree Grand Larceny can, but does not always require, incarceration upon conviction. If, for example, you had a prior felony in the preceding ten years and you found yourself in front of a judge, then upon a determination of guilt the court would have no other option but sentence you to a minimum of two (2) to four (4) years in prison and a potential maximum of three and one half (3.5) to seven (7) years “upstate.” If, on the other hand, you had no prior history – zero record at all – a judge could still incarcerate you for as long as two and one third (2.33) to seven (7) years. Because he or she would not be mandated to do so, if the disposition was not pre-agreed upon, your defense attorney could request that your punishment be limited to no jail, up to one year in a county jail, probation, community service, fines or even a simple conditional discharge.

The three more common scenarios involving a Third Degree offense include Embezzlement type schemes and employee-employer related thefts, Identity Theft or related frauds, and situations where the accused simply takes property that he or she was not entitled. Playing these out, whether straight out Embezzlement or an employee alters deposits and pockets $40,000, they would run afoul of the law. Similarly, if defendant secured access to another person’s credit cards and illegally ran up a bill for $6,500 or stole a prized vase or diamond pendant valued at $25,000.00, then he or she would likely face at least one count of this crime at the time of arrest or arraignment on a felony complaint or indictment. Know that even if you receive a Desk Appearance Ticket to later return to court, not only does the crime carry the same full weight as if you were processed through central booking, but you could show up to your arraignment weeks later only to find out you have already been indicted by a Grand Jury.

Your Case, Your Defense, Your Future

Remember, an allegation is proof of…only an allegation. You are presumed innocent until if and when the District Attorney proves guilt beyond a reasonable doubt. How can prosecutors establish you embezzled, for example, or skimmed from your employer when others had access to the accounts, safe, or transactions slips in question? What if the DA cannot establish value or it is less than what a complainant alleges? If you made a statement, can it be suppressed and is it otherwise credible? Simply, your defenses are only as good and viable as your defense team’s ability and willingness to do a deep dive into your case to ascertain the best response whether it is pure mitigation or fighting “facts” and law.

Be smart and educate yourself on Grand Larceny crimes in New York as well as the direct and collateral consequences of arrests and convictions on Crotty Saland PC’s resource page. Learn about the additional crimes you may face as a result of your alleged conduct – Forgery, Falsifying Business Records, Criminal Possession of a Forged Instrument and more. Will your job with the state, city, or other public agency be compromised? Yes. Will you have to disclose this failing on a FINRA U4 or to the FDIC? Certainly. Can you lose your license to practice law or the same as a nurse or an accountant? Absolutely. Might the United States government deem this conduct a Crime Involving Moral Turpitude and terminate your H1B or F1 visa or complicate your pursuit of a green card or citizenship? No doubt.

Have no misgivings. Whether you spend a day in jail or you are branded as a convicted felon without any incarceration, a failure to protect yourself can – and will –have ramifications that follow you in perpetuity. There are no options. Either you submit to the accusations or you let experience, knowledge and advocacy navigate you to the best possible result. When given only one real choice, the answer is clear. Contact the criminal lawyers and former Manhattan prosecutors at Crotty Saland PC or allow yourself to wear a Scarlett Letter of shame forever.

Call Our Theft and Larceny Defense Lawyers and Former Manhattan Prosecutor at (212) 312-7129 or Contact Us Online Today.