Likely the most common New York felony theft offense, Fourth Degree Grand Larceny, Penal Law 155.30, has many unique and distinct subsections. Although White Collar and Grand Larceny defense attorneys in the NYC metropolitan area – Manhattan, Queens, Brooklyn, Westchester, Rockland – routinely represent clients accused of subsection one (1) of this crime where there is an alleged wrongful taking of property valued in excess of $1,000.00, but not more than $3,000.00, nothing in the criminal code prevents prosecutors from charging more than one provision in a felony complaint or indictment. While there may be numerous felony offenses in an accusatory instrument, and Penal Law 155.30 may be the lowest of the four degrees, there is no such thing as an inconsequential conviction. Simply, as a class “E” felony, such a conviction is indelible in terms of a record, leaves an accused exposed to incarceration, and will no doubt jeopardize a defendant’s career and legal status in the United States. 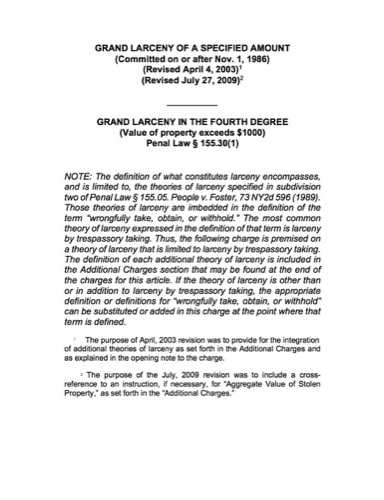 The bind that keeps all the different theories of Fourth Degree Grand Larceny together is one basic and common element – you steal property. Not just a mere taking and giving back, prosecutors must prove that you intended to deprive another person of the property in question or keep the same for yourself or a third party.

While the above elements are further defined, assuming your conduct satisfies the same, in order to run afoul of Pena Law 155.30(1), the “typical” charge, a theft must be north of $1,000.00 and equal to or less than $3,000.00. Keep in mind that even if the monetary value of the property is less, you may be nonetheless exposed to arrest and indictment for PL 155.30. In accordance with the following subsections, you will find yourself potentially immersed in the criminal justice system if the property allegedly stolen consists of:

New York’s theft sentencing guidelines would not mandate incarceration upon a first arrest and conviction for this class “E” offense. However, a second felony offender, depending on the circumstances, would face a minimum of one and a half (1.5) to three (3) years and a maximum of two (2) to four (4) years in prison. Assuming a record is lacking, the previously mentioned first-time offender could nonetheless find him or herself sentenced to prison for up to one and one third (1.33) to four (4) years in prison. That said, a judge would have the authority, even over the District Attorney’s objection assuming this was a top count conviction or plea, to punish a defendant anywhere between no jailing for up to one year in a county facility. Alternatively, punishment can include a term of probation, a “split” of jail and probation, community service, fines and some other conditional discharge determined by the court.

The more common scenarios where criminal lawyers, judges and prosecutors see these offenses is where a person shoplifts at a high-end department store and the clothing, jewelry or electronics fall within the value range for the Fourth Degree crime. Another situation may involve skimming from an employer, aka, Embezzlement, even if not in the tens or hundreds of thousands of dollars. This could be as basic as a waiter altering orders and transactions or just pocketing money. Obviously, there are numerous ways an accused can run afoul due to the eleven categories, but know that you might steal a wallet valued at only $50, but because there are three credit cards inside, the police can charge you with three counts of Penal Law 155.30. Similarly, irrespective of what you take, if you pick someone’s pocket or even slide a purse discreetly off the back of a chair that person is resting and remove it from their person before taking off with your ill-gotten gains, you will also be exposed to felony prosecution no matter what the contents are worth.

Your Case, Your Defense, Your Future

Is Fourth Degree Grand Larceny the most devastating and shattering offense on the books? Heck no. Can it ravage your career, destroy certifications and licensure, and leave you exposed to inadmissibility because your acts may be deemed a Crime Involving Moral Turpitude? Absolutely. Do not be naïve. Whether you’re a physician’s assistant, accountant, or you must answer to FINRA on a U4, even without spending one night behind bars any conviction will leave you with a lifetime of regret. Collateral consequences are quite “real.” Merely because you received a Desk Appearance Ticket does not change this equation.

Remain silent and seek legal counsel should you find yourself a target of an investigation by the NYPD, State Police or District Attorney. Educate yourself on New York Grand Larceny offenses, associated sanctions, and collateral ramifications on Saland Law’s Grand Larceny resource page. Understand that you may have a strong defense from one as simple as whether law enforcement can even prove you stole the property in question. Discuss with your attorney how you might mitigate your conduct if the evidence is overwhelming. But whatever you do, take the steps to protect yourself and your future by identifying the strongest defense and strategy before putting the same into motion.

When faced with terrifying accusations and disastrous consequences within and outside the justice system, turn to advocacy, experience and knowledge. Let the criminal defense team and former Manhattan prosecutors at Saland Law be your best defense.

Call Our Theft and Larceny Defense Lawyers and Former Manhattan Prosecutor at (212) 312-7129 or Contact Us Online Today.

Jeremy Saland
Contact Us
Practice Areas
Client Reviews
★★★★★
... I was facing a class B felony and potentially tens of thousands in fines and some legit jail time and after hiring Jeremy Saland he obviously struck enough fear into the prosecutors with his sheer litigation might that it was knocked down to a petty misdemeanor and after a few sheckles and a handful of counseling sessions, I will no longer have a criminal record. The offices of Saland Law are the Shaq and Kobe of criminal defense in New York City and to even consider another firm is outright blasphemy. I stand by this statement 100% Evan
★★★★★
Let me start by saying how amazing Liz Crotty is! I am a resident of California, who needed representation for my son who received a desk citation while he was visiting NYC. Liz jumped on the case right away; she was very thorough in explaining things to me. She is strictly business too! She went to court on my son's behalf and had his case dismissed. I am forever grateful to her. Seana G.
View More
Submit a Law Firm Client Review