New York Penal Law 120.05, Assault in the Second Degree, is a significantly more serious felony than the Third Degree offense, but a lesser crime when compared to the First Degree offense. Not only is there a presumed minimum sentence of two years in a New York prison, Assault in the Second Degree is punishable by up to seven years incarceration. When an arrest, whether pre or post-indictment, involves domestic or familial violence, know that a prosecutor's scrutiny and a judge's willingness to punish you severely is a matter that demands your attention and that of your criminal lawyer.

Like the lower level of Assault, NY Penal Law 120.05 has many nuances, distinct subsections and a significant amount of legal decisions that impact how your legal counsel will not only analyze the case against you, but implement a viable and, if handled correctly, the best defense. The following are some of the more commonly prosecuted sections of Assault in the Second Degree throughout New York City - Manhattan, Brooklyn, Queens and the Bronx - as well as the numerous counties making up the Hudson Valley -Westchester, Rockland, Putnam, Dutchess and Orange. 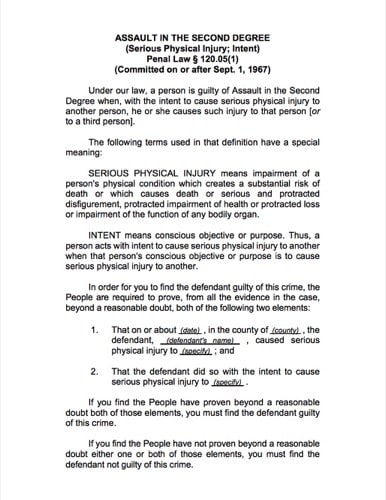 You thrust your elbow with all your might into the face of some person. It is your intent, for lack of a better term, to "smash" her face. Despite your efforts, the damage you inflict is a swollen shut eye and a fracture to the nose. "Serious physical injury?" Likely not. While such injuries would undoubtedly fulfill the elements of Assault in the Third Degree, the burden upon the District Attorney is far greater and requires any injury that, for example, causes a long-term protracted health issue. So, instead of a fractured nose, if you intended to cause the more significant damage and as a result of your crushing blow you blinded the complainant or broke his nose requiring surgical procedures to repair the damage, prosecutors could pursue this felony offense.

If you have the intent to cause only a physical injury, a welt on the head, a stunning blow to another person's stomach, or a kick to the genitals putting that person temporarily "out of commission," you likely have not committed a felony if you use your hands, fists, or feet. Assuming you cause the physical injury you intended, however, and you did so through the use of a "dangerous instrument" or "deadly weapon," then prosecutors have the legal ability to increase the crime from a misdemeanor to the violent felony of Assault in the Second Degree, New York Penal Law 120.05(2). Unlike New York Penal Law 120.05(1), even though both crimes expose you to the same penalty and punishment, the level of injury caused need not be "serious injury," but merely a "physical injury" effectuated by and through a dangerous instrument or deadly weapon for the purpose of NY PL 120.05(2).

Further described in the section dedicated to NY Penal Law 120.05(2) and a matter to address in greater detail with your criminal defense attorney, an instrument is a "dangerous instrument" when it is used in a dangerous manner that can cause serious injury or even death. Obviously, something innocuous in its normal setting can become a "weapon" when used in violent, aggressive and dangerous manner.

If instead of using your fist to punch someone to cause the physical injury you use the handle of a gun to pistol whip, a kitchen knife to cut, a chair to slam on the head, or the heel of your boot to stomp on the face of another person and you inflict a relatively minor injury that causes only "substantial" pain such as a small laceration, "shiner," or loose tooth, law enforcement can likely charge you with subsection two of Second Degree Assault.

When you commit the crime of Assault in the Third Degree where your intent is to cause a physical injury, and the victim is a police officer, fireman or other peace officer, then you are guilty of New York Penal Law 120.05(3). The additional element, however, is that you must also intend to prevent that officer of the law from performing a lawful duty.

A common scenario that violates the Penal Law, if an NYPD officer is attempting to place you under arrest and you bite or punch him or her, and you cause some injury that causes the lower pain threshold, you likely committed this felony.

As noted above, whether you have a prior criminal history or not, a conviction for any subsection of Penal Law 120.05 can land you in prison for up to seven years. Both prosecutors and judges will presume, as the law requires, that you will serve at least two years. Only with the proper defense, should a conviction be inevitable, can you avoid this minimum sentence. Even assuming that you do so, you could still serve time in prison or jail, on probation for five or more years, or saddled with community service, treatment of some form and fines.

Only a fraction of the many different subsections of Assault in the Second Degree, the above three subsections are the most commonly prosecuted by Assistant District. Because there are many legal definitions and legal decisions defining the scope and nature of these crimes, it is critical to vet your case and facts with an experienced New York criminal defense attorney. Equally important, regardless of the subsection you face, failure to implement the best defense will without question inflict direct and collateral damage of grave proportions.

The former Manhattan prosecutors and New York criminal lawyers at Crotty Saland PC are armed with the practical experience and knowledge to defend you against any Article 120 allegation. When there is no substitution for advocacy, you can count on Crotty Saland PC to identify and implement your best and strongest defense.