Other than killing another person, First Degree Assault, pursuant to New York Penal Law 120.10, is the most serious crime found within the pages of the criminal code. A "violent crime" by definition, a sentence and punishment for this offense is minimally five years in prison. In fact, even without a criminal record, an arrest and ultimate conviction for Assault in the First Degree can result in as much as 25 years in jail. Although a New York criminal lawyer or Assault attorney can analyze the evidence against you as well as your criminal history, the value of experienced and knowledge legal counsel is not merely to defend you after the fact but to identify the best defense before ever having to deal with consequences of conviction.

In the simplest of terms, all intentional New York Assault cases stem from the same general concept. That is, you are guilty of Assault in any degree if with the intent to cause a physical injury to another person, you in fact cause that type of injury. One of the key factors that differentiate the misdemeanor Third Degree variety, New York Penal Law 120.00, from the felony First Degree is the injury prosecutors must prove you intended to cause and actually caused. To prove a violation of Penal Law 120.10, prosecutors must establish, and prove beyond a reasonable doubt, that you intended to cause a "serious physical injury" to another person and were successful in doing so. Further, in order to satisfy the elements of this crime, the serious physical injury that you caused must have been as a result of you using a weapon or "dangerous instrument."

Use of a Weapon or Dangerous Instrument

Another critical element of the statute is that your actions can't merely be born from fists, elbows and feet, but by either a "weapon" or "dangerous instrument." Like the terms above, a weapon is something you are probably familiar with, a firearm or switchblade knife for example. An instrument is considered a "dangerous instrument" if in the manner in which it is used it is readily capable of causing death or a serious physical injury. This instrument could be the shoe on your foot, an umbrella, a vehicle you drive, or even a spoon. It's not so much the instrument (within reason), but the manner it is used and the damage it can cause.

You are angry at your neighbor. You want to teach some guy at a bar a lesson. You decide that your spouse "deserves" a beating. No, you do not kick, bite or punch him or her. Instead, you shoot him, stab her or use the spoon mentioned above to gauge our his or her eyes. As a result, your alleged victim loses an eye from the bullet, knife or spoon or is blinded by your conduct. If it was your intent to cause this serious injury and he or she suffered the same, you are guilty of this violent felony. Even if the injury does not raise to the level of a "serious physical injury," it is very likely that prosecutors could still secure an indictment or conviction for the lesser, but felonious, Penal Law 120.05 offense based on the lower "physical injury." 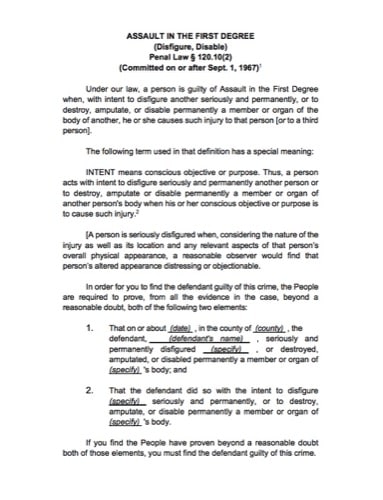 There is no escaping incarceration upon arrest, indictment and ultimate conviction for this crime. Without any prior brushes with the law, a judge must sentence you to no less than five years in prison and no more than 25. If you are a predicate felon, then the minimum is seven years and ten years in prison respectively depending on the nature of your past offense.

Your Arrest, Your Case, Your Future

As dreadful and terrifying as a charge of First Degree Assault may be, an allegation of wrongdoing is not proof of criminal activity. An impassioned defense and detailed approach to your arrest, indictment or trial is essential. Are there any independent witnesses not related to either party? Is there any video of what occurred? Was a 911 call made? If so, who made it? Was the instrument recovered? If so, was it legally recovered such as through a search warrant? Will law enforcement prosecute your case as a crime of domestic violence and how will that impact its trajectory? Did the prosecution overcharge the crime? In other words, there may be an injury and one that appears serious to a layperson, but is it serious as defined by law?

Whatever the evidence, identifying your defense as early in the process as possible is arguably the most important step. Whether detectives are just beginning their investigation or there has been an arrest, you and your criminal lawyer must address whether you want to talk to law enforcement or not (be careful…what you say can and will be used against you), begin securing and preserving evidence and ascertain how bail will be paid should it be set by the court. Further, because your arraignment, when you first see a judge, has the potential to set the stage for future actions, you and your criminal defense team should determine or at least begin to discuss if you should exercise your right to testify in the Grand Jury.

The questions and issues in any case, especially one as serious as a First Degree Assault arrest, are numerous. The potential for mistake if not handled properly are enormous. Educate yourself on the law, take the steps to protect your future and begin your defense before your future, liberty and family is compromised further. Because so much is at risk, retain the criminal lawyers and former Manhattan prosecutors at Crotty Saland PC.